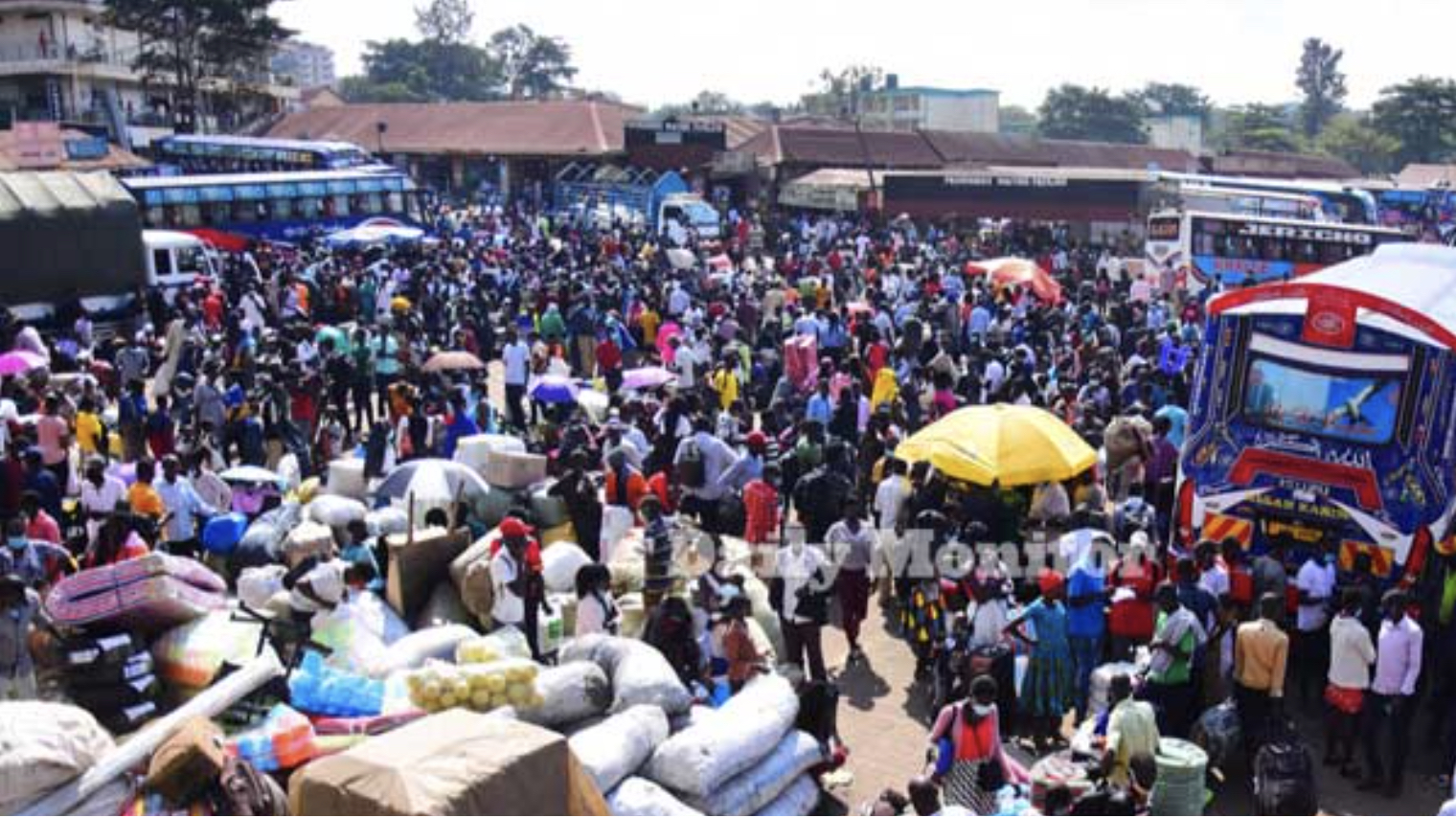 Bodaboda (motor-bike taxis), matatu (mini-bus taxis) and coach parks in Uganda were milling with students and teachers being sent home from schools last week. The Delta variant of Covid has reached Uganda. Schools have been closed for 42 days as part of a new national lockdown. Sadly, this has turned into an unintended super-spreading event and Covid is now spreading fast.

When I spoke with school Directors 3 weeks ago, they were reporting little evidence of Covid around the schools. In fact, during the whole pandemic still fewer than 400 official deaths were recorded before the arrival of the new variant. Things have changed dramatically. The virus has spread rapidly and is affecting all age groups. Hospitals are overflowing with patients. ICU facilities are limited and cannot cope. Supplies of oxygen and medicines are running out. Peter Kisirinya, Director of Isaac Newton School, says that ambulance sirens can be heard throughout the day and local joiners are doing a big trade in coffins. It is becoming reminiscent of the situation 20 years ago when HIV/AIDS was at its peak. Peter’s mother has been rushed into intensive care with Covid and he thinks his father is showing symptoms. Two of the school askaris (security guards) are ill, as are the three guards at Mustard Seed School. So far, no teachers or students have succumbed to the virus, but it is a worrying time for all.

At Uganda Humanist Schools Trust we are determined to do everything we can to ensure that the efforts that have been made to create the ground-breaking Humanist Schools is not lost. We will do our best to ensure that the children have schools to return to when the Covid lockdown ends. The main issue if staffing. Much as we would like to, we do not have the resources to cover the entire salary bill during the school closure. We have agreed to pay a half salary through to July, the end of the school year. We are also making supplementary payments to cover costs that must be met even when the schools are closed – security, essential maintenance, and fixed charges for utilities.

All the Humanist Schools have a close relationship with their communities and wish to help them at this time of need. There are families of school children around the school who are literally starving due to the loss of their livelihoods. The schools are doing what they can to help by providing maize meal and beans to feed the children. The builders at Katumba Parents Humanist Primary School are marooned due to travel restrictions. So, we are providing money to enable them to finish off the school. Apart from this, we have stopped all other building projects and mothballed a plan to work with Play-Action International to put playground equipment into the 4 primary schools. At the present time, all our efforts need to be focused on ensuring the schools survive.

Schools are due to reopen in July. However, the problem will continue until a substantial proportion of Uganda’s population has been vaccinated. The main supply from India has been cut off due to a temporary export ban. The Uganda government has prioritised health workers and teachers for the limited vaccine supplies. Teachers at Isaac Newton and Mustard Seed School have received first doses of the Astra-Zenica vaccine, as have some teachers in the primary schools, but stocks have run out for the second. At UHST we realise that Covid will be a challenge for the schools for another year at least. We will have to make effective use of the money we have if we are to support the schools through the pandemic. We are determined to do everything we can to ensure that the Humanist Schools are able to resume the outstanding contribution that they are making to the lives of children in their communities. We really appreciate the efforts of our supporters for helping us through this unforeseen disaster. 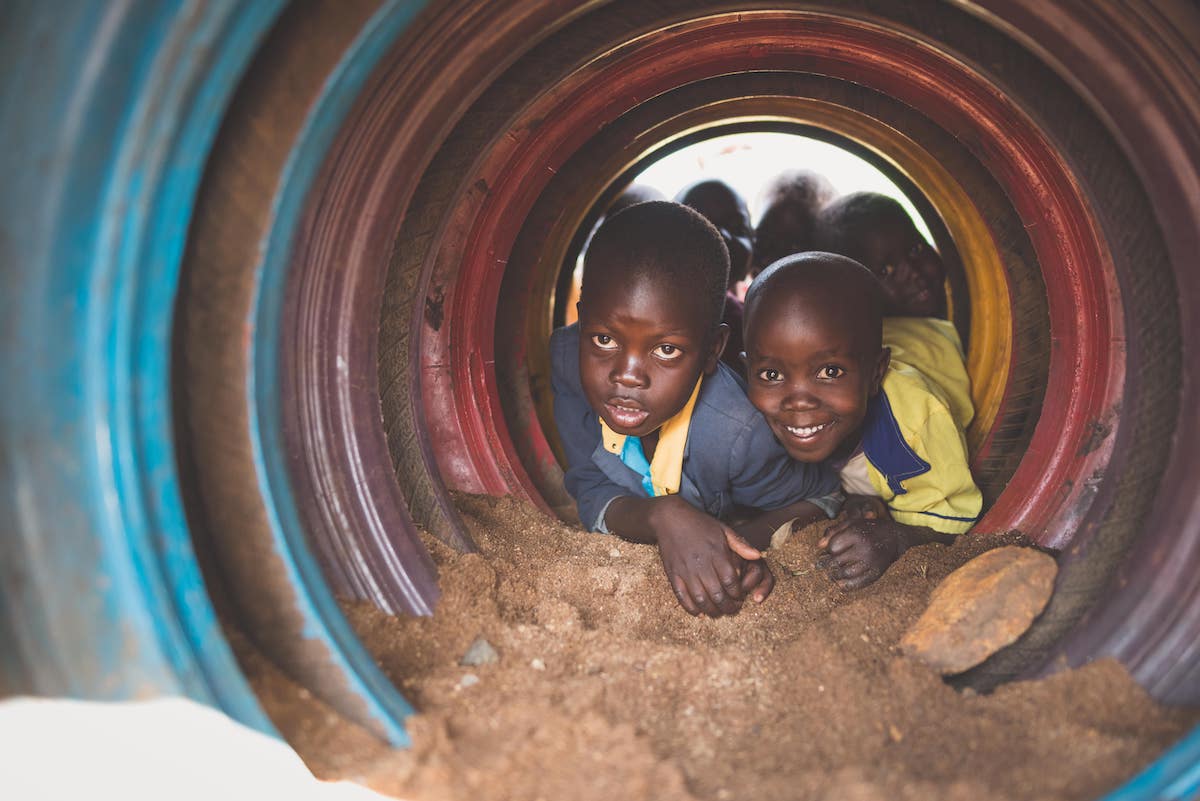 Bringing the Joy of Play

Our schools are in poor rural areas where families find it difficult to make ends meet and many children are required to work from an early age. They rise early to complete household chores before they go to school. They fetch water and firewood when they return in the evenings. In cases of extreme poverty, some children do hard physical labour as charcoal burners and carriers.

Going to school is a relief from the daily drudgery but in many schools, children have formal lessons all day long. Humanist Schools are a little different. They recognise that children learn better when schools are welcoming and caring, and foster a happy environment based on mutual respect.

Play Action International has many years of experience developing playgrounds in situations of high social stress, such as in camps housing the many refugees that Uganda cares for from the Congo and South Sudan. They work in impoverished rural areas, where they have found that schools with well-designed playgrounds have:

We all recognise the truth in the adage that “All work and no play make Jack a dull boy”. Through this collaboration with Play Action International, we aim to help the Humanist Schools to foster joy and happiness through purposeful play. Play Action International has put much thought into designing playground equipment that is safe, durable and promotes imaginative play (a few of these are pictured). As part of the project Play Action will run 4 days of play-based education training in each school to introduce the schools to new strategies for learning through play.

We should like to thank UHST supporters for enabling us to buy two failed primary schools. It was difficult to ignore appeals from the Directors of Isaac Newton and Mustard Seed Humanist High Schools, which had, in turn, been petitioned by members of their local communities. The attached photograph shows parents from Kateera village meeting Peter Kisirinya to plead with him to save their local primary school.

A similar meeting took place in Busota, where local families pressed for Moses Kamya to turn their failed primary school into one run on the lines of the Humanist high school, which has become much respected in the area.

We received donations of £38,000 which, with a bequest from the will of Thelma Taylor, a long-term supporter of our charity, made it possible to buy the two schools.

There is still a lot to do to bring them up to standard. However, there is enough money to make a good start on this. We have worked out a programme to refurbish the schools, improve the water supply, construct decent toilets, appoint teachers with some pay in advance so they can have some confidence that they will be looked after. Each school needs a playground for the little ones and books, educational toys and learning materials.

Families in the two communities are delighted. They have seen the difference that Humanist schools, based on reason, compassion and tolerance, can make to their children and indeed to the whole community around them and they will do all they can to support the new schools.

The last two years have seen a step change for UHST and the Humanist school movement in Uganda. We are important partners of two Humanist high schools and four Humanist primary schools and are helping to support new schools as they come along. Reports will be sent out in the next few days on developments at the Katumba and Kanungu Schools, near the Congo border.

I would like to say a big thank you for supporting these ground-breaking Humanist Schools in Uganda. Perhaps they will become a model for other countries. The second photograph shows happy children from the rescued primary school visiting the campus of Isaac Newton High School.