The Humanist schools operate in deprived rural areas of Uganda.

The country was the epicentre of HIV/AIDS in Africa. In the early 1990s 32% of the adult population was infected. By promoting open public debate and health education the country has managed to reduce HIV incidence to very low levels today.

Despite the huge progress, the epidemic left two million children – almost 20 per cent of all children – as orphans who have lost one or both parents. 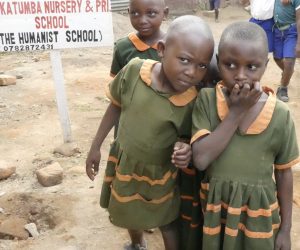 AIDS orphans are forced to rely upon elderly relatives, family friends, neighbours and, even, older siblings for support.

One of the schools we support is in a rural area some way off the main road between Kampala and Masaka. The land is fertile and normally grows sufficient food. However, as a result of disease in the coffee bushes and the loss of able bodied workers, local people have become dependent on producing subsistence food crops such as green bananas, maize and beans. In such a low cash economy schooling has become a luxury beyond the means of many households.

To attend school in Uganda children have to find money for school fees, uniform and exercise books. Parents and guardians do their best to raise the money and, when successful, they are equally willing to provide for girls and for boys. However, for many orphans and children from poor homes schooling remains a dream. Many of those children that do start school find that they have gaps in their education in those years when household income is low. As a consequence many children start their secondary education as late as 14 or 16 years of age and others drop out of school altogether. Primary school enrolment in Uganda has grown from 62% to over 90% during the life of our charity. However, the proportion reaching secondary education is still below 30%.

The Humanist schools are relatively new schools. They are less well resourced than we would like and have to set low tuition fees, due to the poor economic circumstances of the communities in which they operate.

They play a crucial role in providing education to children who would otherwise go without and, in the process, are helping to transform livelihoods in the communities where they operate. Each of the schools is dedicated to using education as a driving force to raise hope and foster development. The schools provide much needed jobs for teachers and support staff. They also provide direct employment to local people in building work as the schools expand.

Because the communities are so supportive of the Humanist schools, there is no shortage of volunteers to help with clearing land, building and making roads. In return all the schools have community-support projects which are designed to benefit the communities in which they operate. The Humanist Students’ Associations in the schools carry out much valuable community work. At Isaac Newton High School they have also set up a Community Enterprise as a form of cooperative to help local farmers by sharing good farm practice and making bulk purchases of farm inputs. These ventures contribute to strong community ties and help to develop local self-reliance.