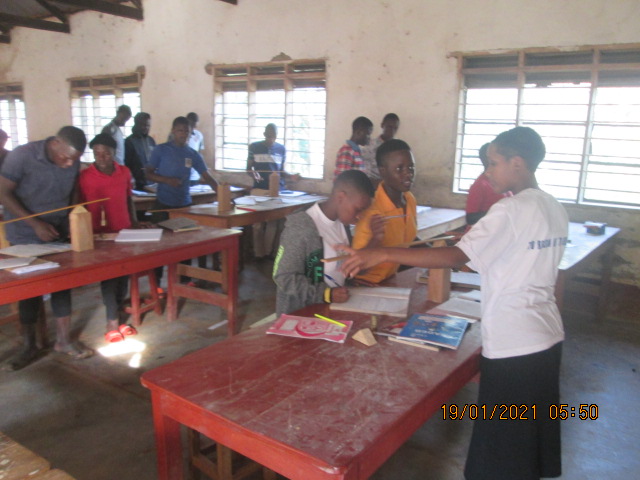 Story of an Isaac Newton Teacher

Here is a story of a former Humanist School student who has returned after further training to help his school and community.

Samuel Ssebuline was a former student of Isaac Newton School who has returned to the school as a teacher after gaining a degree in Agriculture. After advising local farmers, who are members of the Isaac Newton Cooperative,  on how to improve their yields Samuel has been offered a place on Makerere University’s Masters Course in Crop Science. All he has to do now is raise money for his course fees. This is Samuel’s story:

I was born in 1996 into a poor family of subsistence farmers in Gomba district. We used to produce food for our own consumption and earn an irregular cash income from occasional food surpluses. With 8 children to support and despite my parents’ best efforts, our family struggled to pay our primary school fees. In lower primary I was partially helped by a local leader, who recognised my potential. By the time I reached primary 6 in 2008, my mother became a single parent. Still having 5 children at home, life was a serious struggle. The only option for me was to join a free government primary school under the “universal primary education” program.  However, this school and many others of the same category face extreme underfunding and so classes were as big as 150. Notwithstanding, I worked hard and scored a First Grade in my Primary Leaving Exam in 2009. Upon finishing my primary level, my mother enrolled me in a government-aided secondary school but, unable to meet even the half fees required, I was forced to withdraw in 2010.

At this point, Mr. Ezra Mulwana, Headteacher of Isaac Newton Humanist High School, heard of my unfortunate condition and offered me a full UHST boarding scholarship, funded by Birmingham Humanists in the UK. This lifeline removed the burden of worry and enabled me to complete 4 years of schooling and to take O-level examinations in the Uganda Certificate in Education. I was the best performing student in my year and gained a highly sought-after overall First Grade, awarded to only 6% of students nationwide.

Given the above outstanding performance, my UHST scholarship was extended to enable me to take A levels in Biology, Chemistry, Mathematics and subsidiary Computing and General Studies. My grades of a B in Mathematics and two Cs in Biology and Chemistry made me eligible for a coveted government scholarship to the top university in Uganda, Makerere.

In Uganda, there is practically a year between taking A-level and being admitted to university. As a payback to the school and to help my fellow students during this period, I volunteered as a teaching assistant at Isaac Newton Humanist High School teaching Biology and Chemistry.  During this period, l was delighted when I eventually heard that I had won a place at Makerere, Uganda’s top university to study for a 4-year degree in Agriculture. Although the course was full time and in Kampala, I travelled back to the school every weekend to continue with my voluntary work and providing extra teaching assistance to students. The school was facilitating my transport costs to and from the school during such days, but I had to make up the time by studying into the small hours on weekday evenings.

On the 15th of May last year (2021), my efforts paid off. I graduated as one of the top four Agriculture students in my year, with a rare upper second-class honours Degree from Makerere University, Uganda’s top institution of higher education. The final year courses capacitated me to contribute to Uganda’s economic development. These included: entomology, nematology, plant breeding, crop disease, animal nutrition and health, dairying, poultry, apiculture, pathology, soil management, marketing & principles of management etc. My course marks ranged from 71 to 91%, just short of a 1st class honours, which are awarded very sparingly in Uganda. This success delighted my teachers, fellow students, my mother, siblings and indeed the whole community around.

Currently, the Isaac Newton Humanist Cooperative is drawing upon my new-found knowledge to enable farmers in the District to implement various projects to boost their productivity and incomes.

I applied and have just been offered a place at Makerere University to undertake a Masters in Crop Science (MCRP) so that I can qualify for a high-level position in the agriculture sector. All I must do now is raise the fees of 5.6 million Uganda Shillings (£1,200). If I take the course part time, I will be able to pay at least a good part of the fees from what I earn as a teacher at Isaac Newton. In Uganda free education at post-secondary level is only offered to academically excellent students and only at Bachelors (First degree) level. All postgraduate courses are fully privately sponsored. The knowledge and skills from the course will allow me to contribute even more to the sustainable development of my community.