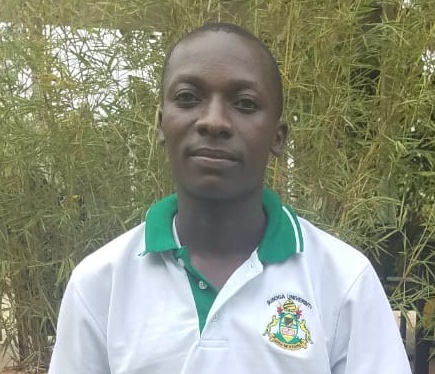 A life transformed by effort, education and kindness

Letter of thanks from David Banige

I started school in 2003. Ms. Monic, my nursery teacher, moved me up 3 classes in one year and, as my academic performance was excellent, she arranged for me to transfer to a better school for my primary education, which I completed in 2009 with very good Primary Leaving Exam grades.

In 2010, I joined Kyabazinga college to study for O-levels. For a time four children from my family were in the same school but eventually my father found it impossible to pay fees for us all. As I was performing well, I was allowed to complete my O-levels, but my 3 brothers had no option but to leave.

Despite getting decent O-levels, due to the bad financial state at home, I could not join the Senior 5 A-level class until almost the end of term two. One day, I met Mr. Peter Kilimani, an Agriculture teacher at Mustard Seed Humanist School. After telling him about my family circumstances and ambitions he arranged for me to apply for a place at his school. From that point on, my life and fortunes were transformed. My father was delighted by the idea of me joining the mighty Mustard Seed Humanist School in Busota.

I joined the school at the beginning of the third term of my senior five in 2014. Joining a new environment could be difficult, but as a new student of Mustard Seed I was made to feel at home by teachers and fellow students. Mustard Seed is a happy school with very good relations among staff and students.

In 2015 when I entered senior six, my father fell sick. He was admitted to hospital and was on sick bed for some good months. Everything our family owned, such as land and livestock were sold to pay hospital bills. When my father died, I lost hope, but the school was marvelous. They stepped in immediately and waived my fees so that I could complete my A-level studies in Agriculture, Entrepreneurship, Geography with subsidiary Computing. I am so grateful to the school Director, Mr. Moses Kamya, and the entire school for giving me the opportunity to complete my secondary education.

The favorable learning environment, good teaching staff and the well-equipped library at Mustard Seed School enabled me to gain three A-levels with grades C, D and E, which were very high at the time for a rural school in Uganda. Although I was one of the top students in 2015, I was unable to join University immediately and had to spend a full year looking for money to pay university fees.

I met great teachers, mentors and advisors at Mustard Seed, who have tremendously changed my life.  After completing my A-levels, the staff were still there for me. My agriculture teacher, Mr. Samuel Ikendi, found me a three-month contract with an NGO where he was working. While working in the NGO, I made very many friends, both Ugandans and Americans. One day, an American guy asked me my highest level of education and after telling him, he decided to sponsor my university education. I am now completing a four-year B.Sc. degree course in Agriculture at Busoga University.  Due to the strong academic foundation I gained at Mustard Seed School, I have coped well with university-level studies. My current Collective Grade Point Average (CGPA) is 4.45 out of 5 and I am currently finalising my final research project with an NGO in Kamuli and Mr. Ikendi is my field supervisor. I have been told to expect to graduate with a first-class honours degree.

I attribute my success to the solid academic grounding I gained at Mustard Seed School and would like to extend my sincere and heart-felt appreciation to the entire Mustard Seed Humanist School, Busota for having shaped me to what I am now.