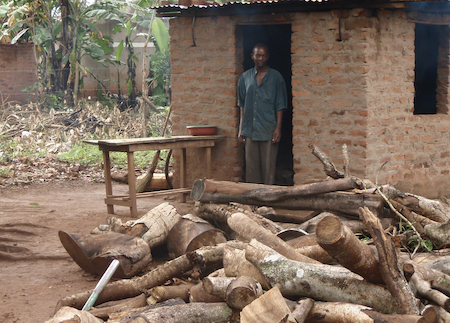 The Humanist Schools in Uganda have learned that providing good food makes for happy students and staff who work well and play well. Schools prepare porridge for breakfast and full meals at lunch and evening time for hundreds of children every day. Traditionally, firewood is used to heat huge cooking pots (see picture below right), and many loads of timber must be brought to the schools each term from further and further afield. Wood fuel use by schools, homes and workplaces in Uganda is destroying woodlands and forests throughout the country, with serious implications for environmental sustainability, biodiversity and climate change. As timber gets ever scarcer, rising prices have a crippling effect on school budgets. In the Humanist Schools in Uganda, firewood is the third highest running expense after staff wages and school food.

One mission of the Humanist Schools is to give children a love of the natural world and produce a generation of environmentally aware and responsible citizens. In the past three years, our schools have engaged children in tree planting to capture carbon dioxide and combat global warming. Uganda Humanist Schools Trust has also raised funds to enable the schools to move away from cooking on open fires. We have provided funds to equip every school with wood burning stoves, which burn wood more efficiently (reducing peripheral heat loss) and are externally vented so the cook does not have to breath in the smoke-filled air. Below are older and newer examples of such stoves.

Replacement of open fires with wood-burning stoves has cut wood use by over two-thirds. Even so, sourcing logs for cooking remains a major problem and significant cost for the Humanist Schools. Our high schools, with up to 600 children, consume up to 26 lorry loads of firewood every year. The smaller primary schools with 120-350 children use 12 to 18 loads a year. The amount they spend on firewood varies from school to school according to the proximity of timber resources. The new and still small primary school at Kanungu has good local sources of timber but still spends between £500 and £750 a year. Isaac Newton School, which brings in timber from over 40 km away, spends £4,000 a year for the high school and a further £1,300 for the new primary school. This makes a substantial dent in the school budget. The Mustard Seed Schools are forced to buy firewood from unsustainable sources at ever greater distances from the school. Katumba School is in a heavily forested area of the Ruwenzori Mountains. They used to take timber from local forests and transport it to the school. Since the Uganda government has put preservation orders on large tracts of forest the school has had to pay high prices from local entrepreneurs who grow firewood as a crop.

UHST and the schools are trying hard to find ways to reduce the environmental and financial burden of using wood to fuel school kitchens. We are researching the issue and considering all options. Electric stoves seem to be an obvious clean solution, especially as Uganda uses hydropower from the River Nile. Unfortunately, to date, we have not found electric stoves with the capacity to turn out meals for 600 children 3 times a day. In any case, hydro power production in Uganda is not keeping pace with demand, so area blackouts are common. We have also considered solar power with battery storage, but the costs appear to be prohibitive.

Gas is another option using either bottled gas or biogas. Bottled gas is not well distributed in Uganda so securing regular supplies may be a problem and the costs are high.  A promising alternative might be biogas. We have just learned of a German initiative to develop biogas using a digester linked to school latrines. We intend to explore this option further. The challenges are likely to be meeting the initial capital costs and ensuring that gas production is sufficiently reliable and of adequate volume for mass catering.

A final option we are considering is the purchase of land for each school to enable them to grow and harvest their own firewood in a sustainable way. Initial enquiries suggest that each school would need at least 4 acres of land, where suitable trees would be planted and coppiced. The price of such an amount of land might range from £5,000 to £14,000, according to the location of the school. If such land would grow the timber each school needs, then it should quickly pay for itself.

Eliminating dependency on firewood for cooking is crucial for school finances as well as for maintaining a decent natural environment for future generations. We intend to work with the schools to find sustainable solutions. If any readers have expertise in this area, we would love to hear from you.